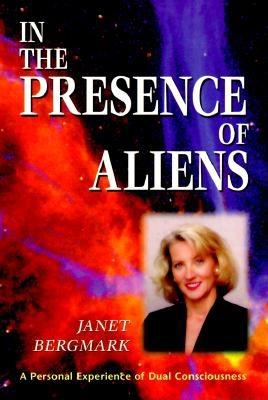 IN THE PRESENCE OF ALIENS : A Personal Experience of Dual Consciousness

"In the Presence of Aliens "by Janet Bergmark is one of the strangest and bravest books you will ever read.
How would you feel after spending years filled with sleepless nights, anxiety, and fear because of something that happened decades ago? You would fear people would mock you, and yet you had to find somebody who could help you reveal suspected encounters with aliens.
Luckily, Janet Bergmark revealed this to Gary Dallek, a professional hypnotherapist, who told her that he had "heard many strange stories over the years." Together, they worked to discover the source of her problems. Her astounding story is what makes "In the Presence of Aliens" a must read
You'll experience Janet Bergmark's terror as she realizes that aliens abducted her repeatedly. You'll see that she develops mental and physical links to the aliens and eventually does not want the contact between them to stop, because she has shared consciousnesses with aliens This leads to the amazing revelation of why the aliens are here and working with many humans.
Janet Bergmark is a remarkable woman. She moved from terror and fear to acceptance. She visited a realm where alien beings and spiritual beings collaborated on a plan to create people with a dual alien-human consciousness.
Learn the secrets of these aliens when you read "In the Presence of Aliens.

Product Name: IN THE PRESENCE OF ALIENS : A Personal Experience of Dual Consciousness

Out There : The Government's Secret Quest for Extraterrestrials

Genesis Revisited : Is Modern Science Catching up with Ancient Knowledge?

Looking for the Aliens: A Psychological, Imaginative and Scientific Investigation

Worlds Beyond - The Everlasting Frontier

IN THE PRESENCE OF ALIENS : A Personal Experience of Dual Consciousness